EDIT (17 May 2020): Of course as soon as I published this three more cases that were not on the databases were published in LawPoints.  The tables and figures have been updated.

We are in lockdown and the moon of public law is ominously full.  The nights draw in and we must now all suffer through a judicial review to find out whether it’s Dr Ashley Bloomfield or Dr Rashly Bloomfield.  Vic academics stalk the airwaves.  To go out after dark is to risk encountering the fearsome Geddis, whose footfalls on the cobbles cause lanterns to flicker.  Rumours swirl that Walker J has been feeding mandatory interim relief steroids in her basement.

We need distraction, and what better distraction than methamphetamine?

Anyway, like me, I am sure you have noticed that this week a bunch of new Court of Appeal cases went up on NZLII all applying Zhang to old meth sentences.  It seems Miller, Dobson and Moore JJ drew the short straw and had to deal with them all in a week of Crim Div sittings.

That got me thinking about whether it was possible to figure out the effect of Zhang on meth sentences.  I think it’s fair to say that the vibe is that Zhang represents a more generous approach.  More concretely, Zhang permits discounts for personal factors in drug cases.  So it’s “generous” in the sense that it treats drug sentencing like other sentencing.  It also fiddled with bands for starting point, that hints at  lower starting points.

Are there numbers to back any of that up?

The short answer is yes.  The long answer is yes, but they’re bad numbers.  So, purely for entertainment purposes and making no claim to serious academicianship (a disclaimer which probably needs to go in a banner at the top of this site), let’s look at the numbers.

Those recent Court of Appeal cases I mentioned are part of a small crop of sentencing appeals in which an appellate court (either the High Court or Court of Appeal) has applied Zhang to a sentence imposed according to the Fatu approach.  These cases allow direct comparison of the two cases.  Actual judges have applied both sentencing approaches to the same facts.  They’re a rare species though.  As Zhang itself points out, Zhang only applies to appeals filed before the judgment in Zhang was issued (and where the application of Zhang will result in a lower sentence).  My search of the database revealed 15 decisions that featured this comparison.  Of that figure of 15, six of the cases were the individual cases discussed in the Zhang combined appeal.

Methodology is difficult for any number of reasons, and the combined problems bork the numbers something terrible.  For example, what starting point do you compare?  Overall starting point is not necessarily just methamphetamine.  It might be set higher to account for other offences committed at the same time.  Comparison with the new starting point figure might show a reduction, but the percentage figure will be affected by the uplift for non-meth offences which Zhang won’t (necessarily) have affected.

You can solve that by comparing just the components of the starting points that relate to meth offending.  But that information is not available in every case because the appellate judgments sometimes don’t record that information clearly.  That reduces the number of cases in the sample from an already dangerously slim 15.

You need to compare end points too, since Zhang does work at reducing end points by conferring the possibility of further discounts for personal factors.

But in all of this, the thing you can’t account for easily is simple error correction.  The appellate court is not necessarily just waving Zhang over an old Fatu sentence.  It is also – potentially – disagreeing with a sentencing judge’s assessment of facts or levels of discount.  If the Court of Appeal increased the discount for a guilty plea on ordinary appellate principles rather than the application of Zhang, then a simple comparison of end point risks wrongly attributing that reduction of sentence to Zhang.

Lastly, I was concerned that these cases might be self-selecting in a way.  Ignoring the real world for a second, you should bring an appeal if you think you stand a chance of getting a lower sentence.  So by only looking at cases where appeals have been brought, you risk limiting your sample to cases where an appellant has already identified they have a chance of lowering their sentence.  In other words, it isn’t a random sample.  I think this is of slightly lesser concern that it might be otherwise because all these appellants had to file their appeal without knowing what Zhang would say.  And while everyone sort of assumed Zhang would help, no one could guarantee that.  In the event, in several of these cases the appellate court has not altered the starting point or the end sentence or both.

Taking all of these caveats together means I don’t think that the numbers can really tell us anything at all.  So let’s see what they don’t tell us.

Part of being Bad At Numbers is that I don’t know how to use Excel.  I am also Bad At WordPress so I don’t know how to insert tables in a blog post.  But below are screenshots of a table I made in Word and manually calculated.  Hopefully you can make these big enough to read. 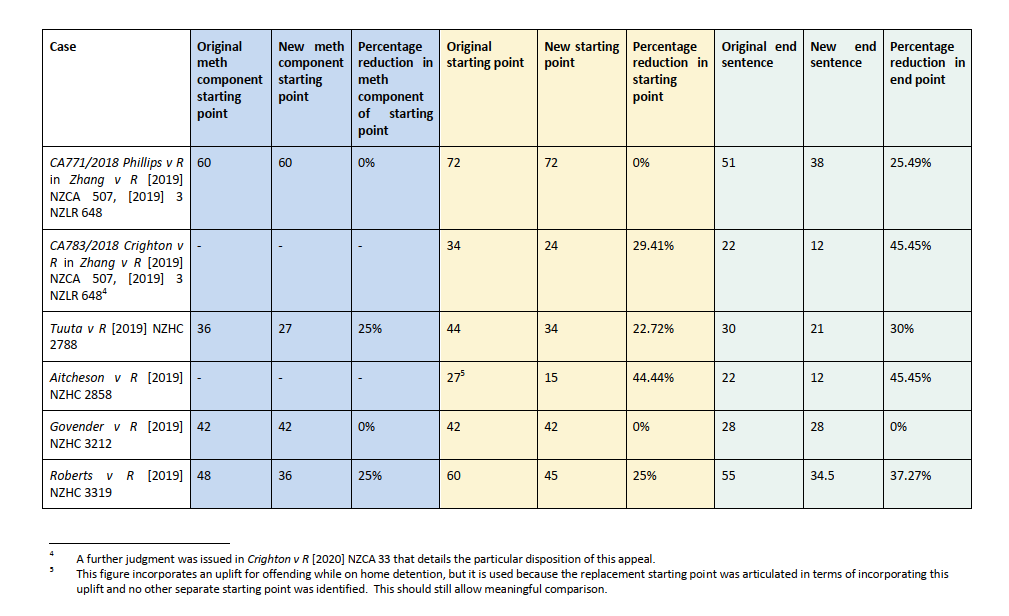 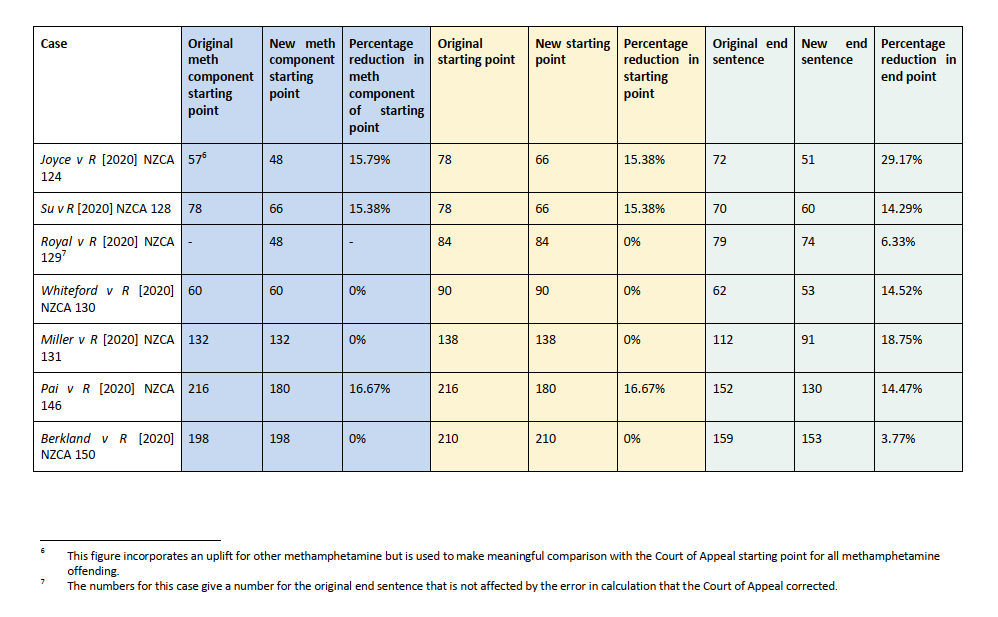 The average reduction in the meth component of the starting point: 8.5%

The average reduction in the overall starting point: 11.76%

The average reduction in end sentence: 19.56%

What does this mean?

I’m not convinced it means anything really.  The sample size is small.  It doesn’t indicate the Court of Appeal is soft on methamphetamine sentencing since the reduction in sentence is not really from the lowering of starting points.  Instead, the reduction is from the application of personal mitigating factors that Zhang.  And that’s assuming you can attribute the discount to a change brought about by Zhang and not correction of another non-Zhang error by the Court of Appeal.  Or, to quote Tom Lehrer, it’s “full of words and music and signifying nothing”.

And if it’s a proper numerical analysis of law that you really want, well I’ve got you covered.